Dispatch from Detroit #2, Slow Down to Rise Up!

I called the Masonic Temple today, a majestic theatre I recall visiting with my parents as a child. I was inquiring about renting the place for a benefit concert to support the thousands of families whose water is threatened with shutoff every week here for non-payment.

“We are a non-profit,” I gently let drop as she reached for the rate sheet.

“Honey, in Detroit, everyone’s a non-profit,” she responded.

In a sense, she’s right. Who living and working in the city today is turning a profit? I’m not denigrating proud local small businesses that are fighting to make it work past the foundation grants and start-up funding and the helpful checks from loved ones. Nor am I dissing the wide web of non-profits that exist to fill the gaping holes in America’s Swiss cheese safety net – though some of them frankly perpetuate rather than curb the inequities. Finally, I am not ignorant of the behemoth corporations who exist in Detroit in name only but whose profits seep out through the tentacles of global finance to New York, Chicago, London, and then Bermuda, Caymans…

No, Detroit is – for the time-being – beautifully unprofitable for most of us. Maybe profit isn’t all it’s cracked up to be. Maybe profitability shouldn’t be the final metric of Detroit’s success in the first place.

The fiscal unprofitability of Detroit slows down time here. Demolition projects crawl along at a snail’s pace. Renovations are over-budget and over deadline. Businesses return your calls and emails a few days later. Life moves at a more human than machine pace here.

When I speak to my social entrepreneurial friends here, they talk of targeting neighborhoods that are teetering on the brink of collapse for land bank intervention or community service. In reality, I think we’re all teetering on brinks all the time, but the ones that move us to action are those that make us feel we can have a positive impact. The pride of low-income Detroit residents collides with the excitement and ambition of young urban activists and change-makers, and creates uncomfortable cultural eddies and waves that we must maneuver honestly and thoughtfully. That takes time, and not the kind that Emergency Managers and “grand bargains” offer in their bankruptcy timelines.

The first widespread viral tactic of popular revolution was the barricade in France, and it spread so quickly because it slowed business as usual in the cities to a standstill so the everyday people could organize themselves. Perhaps we need a 21st century tactic like the barricade – be it digital or analog, but always non-violent – to slow down the hectic hum of gentrification and privatization and build out plans to make Detroit more equitable, sustainable, creative, diverse and just plain fun.

To rise up, we just need to slow down. 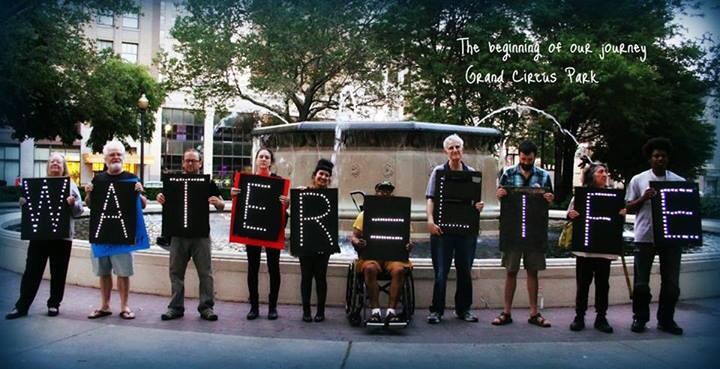