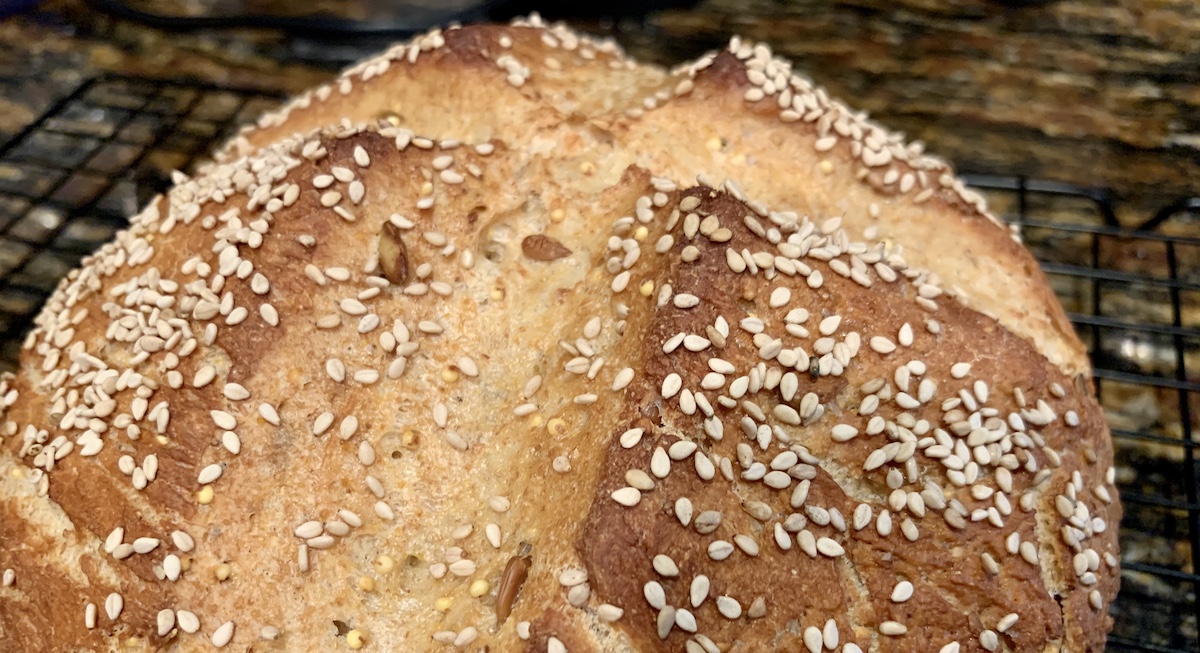 In a small ball, proof your yeast by lightly mixing yeast and brown sugar in warm water (between 105 and 110°F). In about 10 minutes, the mixture should foam up and about double in size.

In the meantime, mix both flours and the cornmeal in a large bowl. Add salt.

Toast the millet, 1 tablespoon of the sesame seeds, pumpkin seeds, and sunflower seeds on medium heat in a small pan over the stove. When a pleasant aroma rises and the seeds begin to turn golden brown, remove them from the heat. (Be careful not to burn them!) After allowing the mixture to cool for a few minutes, fold the pan into the flour mixture.

Heat the maple syrup in a microwave or in a small saucepan on low heat until it’s just above room temperature.

Now add the proofed yeast, maple syrup, olive oil, and 1 cup of (warm) water into the flour/seed mix bowl. Stir with a large spatula, adding additional water as needed until a sticky, doughy ball forms. (You may prefer – as I do – to put down the spatula halfway through this process, wet your hands with the warm water, and shape the dough ball with your bare hands, whirling the ball around the sides of the town to gather all the flour. When the dough ball coheres, spray or brush the bottom and sides of the bowl with olive oil and place the ball in the center, covering it with a slightly-damp towel. Let sit for about 30-60 minutes, until the dough has doubled in size.

Lightly flour a clean surface lightly and knead the dough for 5-7 minutes, dusting it with only enough flour to keep the dough from sticking to your hands or the surface. Spray or brush olive oil into the dough bowl again before returning the dough and covering.

In 6-10 hours, preheat your oven to 400°F. If making round loafs, place two dutch ovens into the oven to pre-heat. (You can also cook the round loafs on a baking tray with a silpat liner, though using dutch ovens will yield a crunchier crust by retaining moisture.) Once again knead the dough only a lightly-floured clean surface and divide into two equal parts with a knife or dough scraper. Shape each part into a dome (for round loafs) or long logs (for rectangular loaf pans). Brush with warm maple syrup and let sit for 15-20 minutes as the oven heats.

Cut one or two lines through the middle of your loaves to allow hot gas to escape from the center of the loaf and to create a visually-pleasing pattern on the crust, using a sharp knife entered into the surface of the bread at a slight angle. Brush again with maple syrup and sprinkle with sesame seeds. Place the loaves into the oven, either in two dutch ovens or loaf pans.

After 22-23 minutes, reduce the oven temperature to 375°F and remove the dutch oven pan tops if using. Cook an addition 10-12 minutes until the crust is golden brown and just beginning to char. Carefully remove from oven, cool, and enjoy!