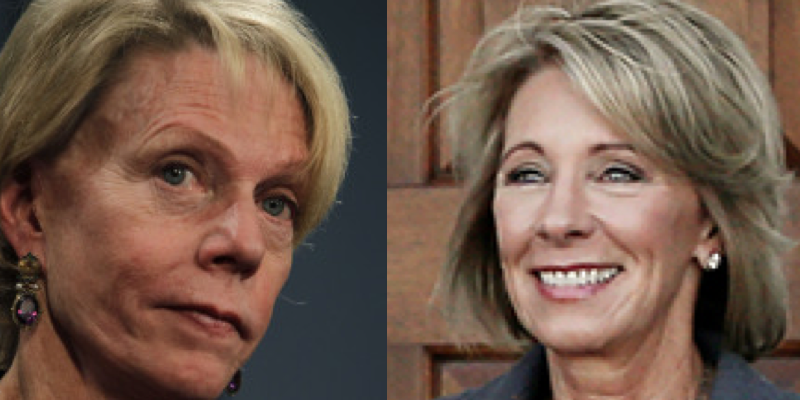 Now that Betsy DeVos has successfully bought herself a seat in the Trump cabinet – and protesters are already making her job impossible – it’s time to start drawing some parallels between the fiasco-about-to-ensue of Betsy DeVos and the fiasco-already-averted of Cathie Black. (For those who don’t recall, Black was the short-lived, cocktail-party-appointed NYC Schools Chancellor under Mayor Bloomberg who inspired a movement against her and the austerity/privatization agenda she came in with. I wrote about that here.)

The similarities are blinding: an elite, out-of-touch corporate education “reformer” appointed by an out-of-touch billionaire businessman-turned-politician with absolutely no public school experience or credentials. Why wouldn’t DeVos face the same startling opposition? Odds are she will.

I wrote a petition over six years ago that helped to galvanize the movement against Black, calling on NY State to deny Cathie the waiver she needed to take the job. Today, I started a similar petition aimed at DeVos, although since she already has the job only her boss or a constitutional act of impeachment can remove her at this point. But don’t fret, Cathie Black already her job too and that didn’t stop protesters, lawyers and policians from joining forces in public pressure to remove her.

Of course, Betsy DeVos is much, much more dangerous than Cathie Black – DeVos is a lifelong advocate for all of the privatization that would defund and destroy public education: vouchers to put public money into private and religious schools, education tax credits, charter schools and all the rest – reforms she herself calls “radical.” But that’s all the more reason to let the fight begin…