Dispatch from Detroit #3, On Water 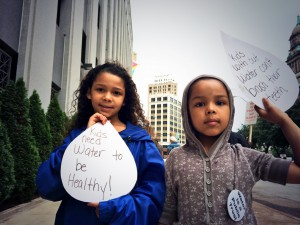 The waves of the Detroit River lap up onto the wall of the riverwalk downtown, and young children play in the fountains that shoot up through the concrete in the park below the towering Renaissance Center. It is Saturday in Motown, and the sun is shining warm rays down on working-class folk enjoying a day of rest.

Just a few miles away, on the east side across the highway, Jean stands on her porch and worries about the pregnant mom whose water was shut off Thursday morning by Homrich contractors working for the City of Detroit under emergency financial management. They came that morning in a red pickup truck with a homemade decal on the side. In an arc around a circle it read “DETROIT WATER COLLECTION PROJECT”- quite official-looking – and inside the circle it read “WATER ****** HOMRICH”, the asterisks representing a scribbled out word SHUTOFF that was removed after community protests about shaming neighborhood residents.

Jean came yesterday to the weekly, growing Freedom Fridays rallies at the Detroit Water and Sewerage Dept (DWSD) to voice her outrage at seeing a pregnant mother and young children denied the basic

human right to water in a city surrounded by the largest group of freshwater lakes on Earth, containing 21% of the world’s surface fresh water. Her voice faltered as she worked to hold back tears on the megaphone. Her tone was one part desperation and one part pure rage, a rage that is simmering with the summer heat and the threat of over 100,000 family water shutoffs in the hot months ahead.

The media has been nearly silent on the issue of water shutoffs since Detroit’s emergency management began to ramp them up last month. With so much negative news about bankruptcy and blight already, could it be that the country has become desensitized to Detroit’s suffering? Or is it just increasingly difficult to cut through the corporate spin machine that seems to dictate so much of what we hear and see these days on the TV and in newspapers, as Conan  O’Brien famously demonstrated when he showed how local news stations were just lazily parroting national corporate press releases. Whatever the reason, you won’t be reading about this humanitarian crisis in USA Today – yet.

Yet. Because we’re going to ramp up the pressure and make this issue un-unreportable.

Yet. Because everyone in the country – in the world? – deserves to know that in the richest country on Earth poor people are having their water shutoff because they can’t pay.

Yet. Because if the water shutoffs don’t stop, an army of peaceful resistance will stop them.

This is a call to action to become part of that resistance.

Visit the Detroit Water Brigade and enlist to help deliver resources and support to those most in need.

Water is a human right.