Edward Snowden is a Hero 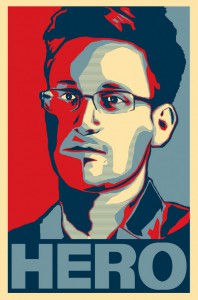 In the digital age, things happen so friggin’ fast that sometimes it’s worth slowing down amoment to reflect on how far we’ve come. Nowhere in our culture is that as clear to me as in our understanding of mass surveillance. A little more than two years ago, in May of 2013, almost nobody was talking about the NSA spying on our emails, our phone calls and our metadata. Heck, that word was so geeky it glazed eyes on arrival!

May of 2013 was the same month a little-known security contractor named Ed left an NSA facility in Hawaii with a few thumb drives packed with the secrets that would bust open the seal on one of America’s best-kept secrets. He fled for Hong Kong, ultimately Russia, and the stuff he shared unleashed a furious debate about government overreach and privacy around the world. John Oliver called for an end to the government’s ‘Dick Pic‘ program, a feature film and graphic biography were made about him, and scientists in Germany named a new crayfish species after Snowden.

Everybody seems to be talking about Snowden, except our government.

I think that, too, will change. Recently, Democratic presidential hopeful Larry Lessig called Snowden “a hero”. The White House finally responded to a petition signed by over 120,000 people to pardon Snowden — albeit with the wrong answer. This is becoming the elephant in the national room that nobody can ignore.

My simple view is that Snowden shouldn’t be extradited back to the U.S. to face trial, he should be paraded through the streets of D.C. and New York as an American hero. Yes, a hero. Like Thomas Paine, who ignited the first American Revolution and then found himself imprisoned in France for helping ignite a popular revolution there, too. And just like Snowden, Paine found no sympathy from President George Washington, who ignored his appeals for safe transport back to the country he had served because he had alluded to secret negotiation underway with France in his pamphlets.

And so, like New Yorkers did for Paine, we the people must organize to bring Snowden back safely.

When Paine was ultimately brought back to New York, he was greeted by the masses with celebration. The political pressure they applied ultimately earned Paine $3,000 from the nascent U.S. Congress in recognition for his services, plus an estate in New Rochelle, New York – all probably negotiated by Paine’s friend on the inside Benjamin Franklin.

Let’s get more of the 2016 presidential candidates to speak out in support of Snowden, and make this an issue on which we judge all of them, Democrats and Republicans and independents.