In typical Wall Street fashion, this week brings more claims that normal people just can’t understand complicated financial transactions. Epitomized by Greg Smith’s claim that Occupy Wall Street “doesn’t know what it’s talking about”, these smarter-than-thou proclamations typically go unquestioned by the media pundits and politicians. As they accumulate, a picture emerges of Main Street as unwitting victims of complex, out-of-control Wall Street schemes. It’s time to bust wide open the myth that everyday folk are too small-brained to understand what has happened to them in the last few years.

The idea that Wall Street is just too smart to be regulated by mere mortals is, of course, the best justification for the corrupt, captured boys 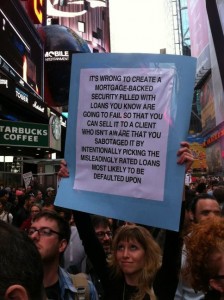 club that is the banker-regulator revolving door. If the only people smart enough to rein in Wall Street are the insiders that worked there, the rest of the citizenry can effectively just sit back and trust Wall Street to regulate itself. No other industry – from the restaurant business to public education – enjoys such a cozy regulatory experience. (On the contrary, school districts across the country have taken to hiring corporate-minded hard-liners to reform them fearing that career insiders are too entrenched!) In reality, the combination of poor judgement, short-sightedness and outright fraud of the last four years demonstrates that calculated greed combined with a healthy dose of incompetence characterized boardrooms on Wall Street. Ben Bernanke, who even admits to having been blind-sided by the housing crisis, is hardly the epitome of clear intellect!

It was the 99% that had to inevitably pay the price for Wall Street’s incompetence, through a series of bailouts originally billed as a housing rescue plan but ultimately enacted as a stop-gap bank-enriching measure. How quickly TARP funds slid into CEO bonuses and bank mergers rather than writing off toxic debt and saving people from foreclosure! Despite the failure of programs like HAMP to bring true debt relief to struggling borrowers, people across the country have banded together to prevent home evictions and build networks of debt resistance, while simultaneously lobbying for principal reduction and criminal prosecutions for Wall Street frauds. Through collective action, consumers band together and build buyer’s clubs to incentivize sustainable and compassionate production while boycotting destructive and abusive businesses that contribute to climate change and don’t pay workers a fair living wage. A team of Wall Street defectors called Occupy the SEC wrote a moving 400-page response to the 2008 financial fraud calling for specific reforms that would put markets at ease and encourage fair, sustainable growth. This is people brain power in action.

From victims to victors

The financial crisis exposed the cruel heart of our crony, casino capitalist system in which the rich prosper at the expensive of the many. Yet, our feeling of victimization may be the strongest impediment to reining in the control of the big banks and corrupt politicians. In Iceland, citizens took to the streets demanding the arrest of those who crashed their economy, a campaign that ended not only with bankers in jail but with a new crowd-sourced constitution, major sovereign debt forgiveness and renewed economic growth. This didn’t come from witty insiders reforming the banks or from theoreticians in ivory towers laying out a master recovery plan, but from the stubborn insistence of everyday people to not fall victim to a rigged system that didn’t represent their social, economic or political interests. The 99% has the power to both demand accountability from Wall Street and build a more just and equitable country here, and we’re absolutely smart enough to do it.