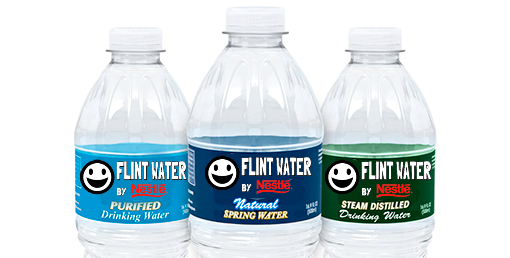 Michigan Governor Rick Snyder, struggling to regain public trust after admitting ultimate responsibility for the Flint water poisoning crisis, announced today an innovative new partnership with Nestle® to keep Flint’s corroded lead pipes in the ground indefinitely and provide clean bottled water to all residents for a low monthly fee. The campaign, titled Everyone Drinks!, will be free for the first year to all residents thanks to generous but unspecified corporate donations to Governor Snyder’s Moving Michigan Forward Fund.

The urgent need for millions of plastic bottles of drinking water in Flint became even more apparent Friday, as new water test results show that the state-provided filters could not ensure safe lead levels for residents, especially pregnant women and children. At the same time, millions of Americans are asking how they can quickly help in a way that doesn’t require too much thinking about the systemic nature of poverty and the corruption of democracy in this majority-black and poor city.

Said Nestlé spokesman John Stanton: “We’re proud to partner with the Governor on this long-term plan to make sure these corroded Flint pipes never get replaced with new publicly-funded municipal infrastructure, so that this horrific tragedy never happens again. We’re here for the long haul, Flint!”

The reduced-cost Nestlé water will be provided to residents at only 750 times the cost of Flint municipal water pumped from Lake Huron, a discount of nearly 25% of regular bottled water, which costs 1000 times more than tap water.

Said Snyder spokesman Daniel Evenmore: “Nestlé has graciously agreed to be our sole partner for all Flint bottled water needs, and we’re proud to announce the creation of a new Nestlé bottling plant in Michigan along with overly-generous tax incentives. This shows our commitment to making sure that the world’s largest freshwater source gets to even our poorest residents – one bottle at a time”

Bottled water can be picked up from local schools and fire stations, after providing valid picture ID along with passport, credit card, birth certificate, proof of insurance, signed pledge of allegiance and affidavit swearing to never sue the state of Michigan for possible complications from Flint water ingestion.

As a show of corporate social responsibility, Nestlé also agreed to extract 3 liters of water from the Great Lakes Basin to produce the plastic and treated water necessary to sell a 1-liter water bottle.