Dispatch from Detroit: What’s In a Desk?

Last week I inherited a desk. It’s a beautiful Mahogany wood masterpiece with a stamp on the inner drawer that reads STOW-DAVIS: GRAND RAPIDS, MICHIGAN. That seal dates it to around 1914, 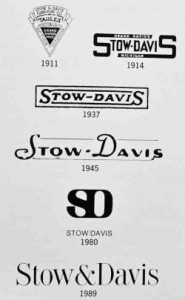 and set my curiosity ablaze: who sat in this desk, and across from it, in its long history before arriving to my new office near 7 mile & Telegraph Road in Detroit? Off I went…

Before I dived into the photo archives, I put my feet up on the desk for a moment to ponder where I sat. It felt strange to be sitting in a desk at all, after years marching on the streets of New York. Had I arrived at a crossroads in my professional life, where I gave up the militant for the conventional? Or was this just the logical progression of my career, driven by my deep yearning for social justice? Suffice it to say I didn’t yet feel comfortable in this desk, but perhaps my research would help me place myself better in its chair.

I remember being told by a friend at Temple Beth El – the oldest Jewish congregation in metro Detroit, which had graciously donated the desk to me – that it had formerly belonged to Rabbi Richard C. Hertz, who presided from 1952 to 1982 (four years before my birth). That would have placed the desk in the Temple’s Woodward and Gladstone building, designed by the famous Albert Kahn. (Kahn crafted most of Detroit’s most famous buildings: the Packard Plant, Fisher Theater, Belle Isle Conservancy, even Angell Hall in Ann Arbor – go blue!) From this desk, Hertz gained a following as one of the most preeminent Detroit Jewish leaders. He traveled with a secret delegation under President Dwight D. Eisenhower to visit the Soviet Union. He was the first rabbi in history to hold a private meeting with a Pope. He was a fervent advocate for social justice, a view which often engendered controversy towards him. From the American Jewish Archives:

He was always concerned with the conditions facing the poor, the underprivileged and  minority groups. Hertz was often criticized for speaking out on issues close to his heart, though these criticisms did not sway his determination to use his prominent position to help those he saw as disenfranchised.

I began to feel a little more comfortable in my chair, but I had to dig deeper. I learned from another congregant that the desk had not belonged to Rabbi Hertz originally, but to his predecessor Rabbi Leo M. Franklin. It made sense, as the stamp on its inner drawer dated it to around 1914, so where did it sit from 1914 to 1952? If Rabbi Hertz was a powerhouse, Rabbi Franklin was no less a giant. He led Beth El from 1898 until 1941, an era of tremendous change and growth in Detroit. Franklin lived on the same block of Edison Avenue as Henry Ford, and they would walk and chat together sometimes on their way to work: Ford to the Piquette Plant, where the Model T was first built, and Franklin to the Temple, then at 3424 Woodward Avenue (now the Bonstelle Theatre). The two became friends, until a falling out after Ford suddenly began issuing anti-Semitic comments in his paper, The Dearborn Independent. Could Ford have sat at this desk?

Almost instinctively, out of deference for the grand history of the desk, I took my feet off its elegant glass-covered top. Back in 2015, I suddenly felt small with the shadow of history towering over me. Here I was, trying to start a brand new company in the heart of a once-great city that had fallen on its darkest hours. Propelled forward by a combination of restlessness and a fierce hunger for opportunity and healing justice for a torn-apart city. Searching for something to ground me in the chaos that is 21st century life. Maybe this desk would be a good start.

I closed my eyes, steadied my mind and lifted my feet back onto the desktop, this time without shame but with a growing sense of urgency: I have some big shoes to fill!

You can visit me and see my new desk at 23700 Clarita St, Detroit, MI – the new headquarters of the Detroit Workers & Builders. We launch this Monday night with a Launch Party & Fundraiser to purchase and renovate an abandoned Detroit elementary school for a local community group. 6pm. Tickets here.