Dispatch from Detroit: Runaway Water Rates And the Case for Nonpayment 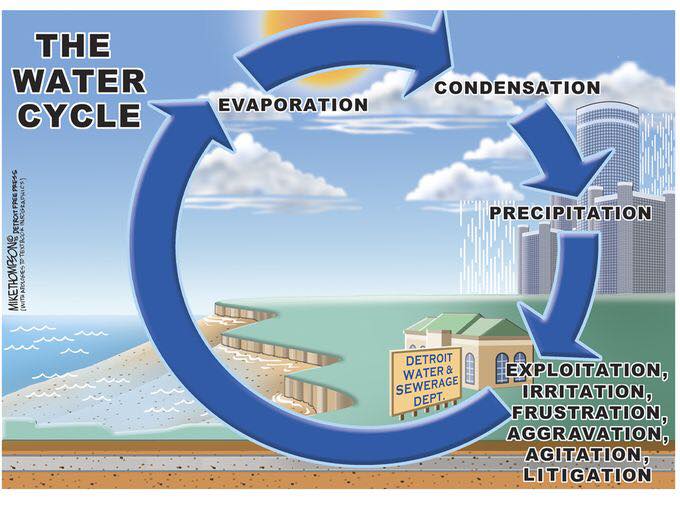 Find out just what any people will quietly submit to and you have the exact measure of the injustice and wrong which will be imposed on them.

Water and sewerage rates in Detroit are literally out of control. Rates have risen 119% in the last decade. This month the Detroit Water and Sewerage Department (DWSD) is proposing another 12% rate increase, even as they cut the water to thousands of low-income residents. Many families spend upwards of 20% of their monthly income on water and sewerage, when the federal government considers 2.5% to be the affordability threshold. 80% of the city can’t afford the water, and nearly half are behind on their bills.

It is well-established in legal case law that a user fee – like your water bill – must be proportional to the necessary cost of the service, or else it is a tax. In Detroit today, the cost of the service and the price have become completely uncoupled: a full half of the price of water is to pay off old bad debt. Think about that for a second: half of the money you spend on your water bill basically goes to pay the interest on a credit card that you didn’t ask for. The guy who did? He’s behind bars for federal corruption (and so is his boss.)

The price is also uncoupled from the cost in another way: people are charged by their usage while 90% of the costs of running the system are fixed, i.e. they don’t depend on how much water we use or discard. This is why we are in the ridiculous position of being told that the rates are going up even while we use less water due to rain and better conservation! A pricing structure that punishes people for using less of a supposedly-scarce resource doesn’t even make sense. The reality is that we aren’t paying for water: we’re paying to line the pockets of Wall Street bondholders with inflated interest payments.

The problem is the banks, in particular the water bondholders. Last year the water department realized that cutting off the water to thousands of poor people wasn’t actually a good way to collect money. (Hint: you can’t squeeze blood out of a turnip!) So they did something smart: they went to the bondholders and asked them to voluntarily turn in their bonds for a refinancing at a lower interest rate. The result was $250 million saved from future Detroiters’ water bills. That’s 10 times more money saved than from shutting off our water – and no one lost their home, kids, or life.

And so we are left with a recurring situation in 21st-century America: The rich are benefitting more from, and paying proportionately less for, essential public services. The reality is that water bills are a tax in Detroit – not a user fee – but a very regressive one for poor people. We should acknowledge this fact and fix the rate structure to be truly progressive. Yes, wealthier people should pay more for water so that poor people can pay less. The alternative is that only some people get water. The alternative is death.

How do we make this shift to water as a human right paid for by progressive general taxation? My proposal is a tried-and-true method from the civil rights movement: boycott payment. The only leverage we the people have against a water department that increasingly doesn’t have to listen to us is our pocketbooks. Let’s refuse to pay, or at least refuse to pay more. Do what some of my friends do in Highland Park, where the city has had such trouble collecting water bills they don’t even send them anymore: pay a fixed, fair amount each month. When the bills are reasonable and proportional to the quality of service and our ability to pay, we’ll pay in full again.

Please sign our petition calling on the city of Detroit to cancel the bad water debt, and help us deliver it at the DWSD’s February 25th water rate hike meeting: 2pm, 735 Randolph Street downtown