My Last Tweet: A New Chapter for Me and for @OccupyWallStNYC

“No bombs or bullets or rocks or guns. Just hashtags and voices at the tops of their lungs!”

It is with hopeful optimism that I announce today my resignation from the Occupy Wall Street social media collective. Effective immediately, I have appointed Priscilla Grim owner and chief steward of the account. Priscilla has been an integral part of OWS media since day one, and she has already begun to assemble a stellar and diverse team around her. I wish the team best wishes in carrying on the game-changing work that has positioned @OccupyWallStNYC as a leading voice in this growing resistance movement.

I have come to this decision after many months of introspection and dialogue with many of the stakeholders in our movement. They have told me of the urgent need to support young, emergent movements like #BlackLivesMatter with bold tactical media in the streets of NYC and elsewhere. We have worked together to bridge independent media groups across the country and the world all working to document and amplify the voices and actions of solidarity movements. Of course, this work is unending and will continue even as I move on to help build the movement in Detroit and other rustbelt cities.

The team writing for @OccupyWallStNYC is now more demographically diverse than it has ever been. If our movement is to succeed, it must constantly adapt and speak to and with those most deeply silenced by corporate greed and political corruption. They bring solutions rooted in centuries of oppression and fight-back, and what is good and just for them will be good and just for all of us. I could not be more convinced that the team I leave today is capable of handling the enormous task of tweeting truth to power.

The current team is also working to resolve the pending lawsuit over the account and establish a structure/process that will allow for even greater diversity and inclusivity in line with the long-standing mission of the collective: to serve the movement as a voice of, and with, and for the voiceless.

As for me, my next steps will be to commit myself full-time to the work of building true political alternatives for the 99%. The successful launch of the After Party – an experiment in building a non-traditional, networked political party – in Detroit has lead to our first elected official (a Highland Park city charter commissioner) and a humanitarian movement to bring an end to that city’s disastrous #DetroitWater shutoff program. This year, we’ll be developing a sustainable eco-village in one of Detroit’s hardest-hit neighborhoods and holding an international Human Rights Summit in Detroit on May 1st. Save the date!

Twitter has been one of Occupy Wall Street’s strongest weapons in the fight for social justice: with it we launched this movement, put thousands in the streets and occupied parks across the world, launched a Freedom School, ignited a disaster relief program, and bought up millions of dollars of distressed debt, amongst many other accomplishments. I salute everyone who has contributed original media to the movement, and look forward to celebrating many more victories with you in the years to come.

For an archive of the first year of OWS tweets, visit Occupy The Tweets 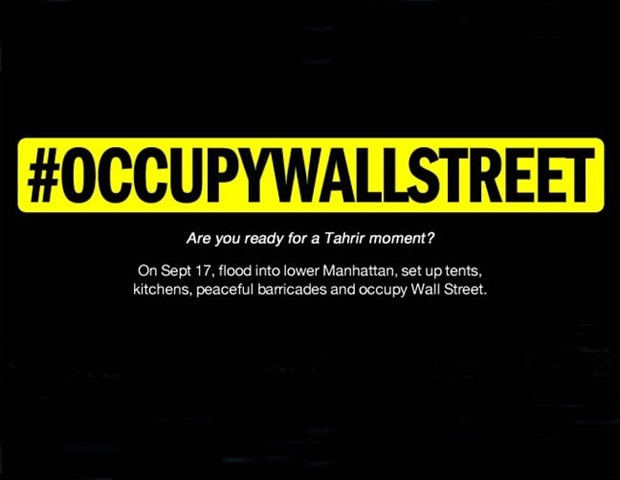