“We can’t bombard the people with more fear. They are frightened. They are terrorized”
-Gael García Bernal, ‘No’

In the 2012 Chilean drama ‘No’ by Pablo Larraín, Gael García Bernal plays René Saavedra, a hip young ad man who is recruited to help a precariously-united left coalition topple the country’s 8-year dictator Augusto Pinochet in a nationwide plebiscite vote. The film is based, albeit loosely, on the true story of how a dictator fell from power democratically after miscalculating how powerful and united his opposition could become. Even in the last moments of the vote, when it has become clear that Pinochet will lose, his generals abandon him and his maniacal plans for a “self-coup” to incite violence and take back control of the country under pretext of a national emergency.

The film is powerful in our age of hyper-mediated living when a 24/7 news cycle bombards us with complicated and often contradictory sensations of fear, resolution and uncertainty. Twitter, Facebook and other social networks aim to bypass official and corporate channels of communication, but in doing so overwhelm us with an echo chamber of un-curated rage and righteous indignation. Meanwhile, our truly public spaces – once the anchors of democracy and civic participation – are quietly privatized and turned to a faceless market accountable to no one. When we turn back to these places en masse, as we did during Occupy in 2011, we are greeted by an ever-more militarized police state hiding behind a façade of “counter-terrorism.” Strange times indeed!

The Politics of Fear

Activists have long understood that autocratic regimes are upheld more by fear than by love:

Upon this a question arises: whether it be better to be loved than feared or feared than loved? It may be answered that one should wish to be both, but, because it is difficult to unite them in one person, is much safer to be feared than loved, when, of the two, either must be dispensed with… a prince ought to inspire fear in such a way that, if he does not win love, he avoids hatred.

The Politics of Fear is the staple of every cocksure dictator and crumbling empire. Grandiose displays of force and genocidal collective punishment are sure signs of a failing state, not a prosperous one. Fear immobilizes the people, turning their aspirations to apathy. The natural and prideful independence of people turns to dependence when people are shocked into fearing for their livelihoods and families. In today’s world, this fear is instilled by massive debt burdens, overbearing police forces and an imposed culture of misogyny and racism/classism under capitalism. Fear’s cousin guilt runs rampant: we are made to feel guilty for being too rich, too poor, too old, too young, too white, too black, too fat, too thin, too anything…

A Politics of Love

The alternative to a Politics of Fear is a Politics of Love. It is the Politics of humor and irreverence, of satire and mockery, of creative expression. This Politics embraces diversity of opinion and lifestyle while striving towards ideals of self-reliance, autonomy, dignity, tolerance and – of course! – love.

Rather than demand of each other or of the government, we command over ourselves.

Rather than conquer, we convince.

Rather than oppose or impose, we compose.

The Politics of Love does not mean we should never directly oppose unjust systems, but it acknowledges what Sun Tzu proclaimed thousands of years ago: you don’t attack your enemy at its strongest point but at its weakest. The weak point of a regime that has lost the consent to govern (the current U.S. Congress has a 7% approval rating, less consent than King George III had in the Colonies) is to be found in the way that everyday people relate to it, not just at the vanguard of a protest march. Knowing that people desire to live in dignity, if the current system can’t provide it: can we? 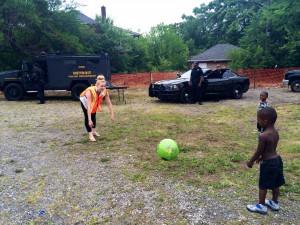 There are two basic motivating forces: fear and love. When we are afraid, we pull back from life. When we are in love, we open to all that life has to offer with passion, excitement, and acceptance.

The City of Detroit is undergoing massive transformations today that can be likened to a failed state. A failed state, according to Fund for Peace, is characterized by:

If you’ve been watching the erosion of democracy in Detroit under the imposition of a state-appointed “Emergency Financial Manager”, you will have noticed all of these criteria present in Detroit:

How is this massive imposition of autocracy over democracy implemented and maintained? Entirely through the Politics of Fear. Long-time residents of Detroit, most of whom are Brown or Black, live in constant fear of eviction, water shutoff, electrical disconnection, police stop, parking ticket, outstanding warrant, debt collection, and myriad other disincentives to speak out about the abysmal state of democracy here.

Furthermore, sometimes good people seeking to counter this trend in fact perpetuate it by themselves operating under a Politics of Fear. Often they don’t intend to do so, but even veiled threats aimed at one’s enemies can backfire and instill fear amongst one’s allies. Succumbing to provocation by police and security guards can lead to violence that then justifies a harsher police response and more drastic measures. When seen through an already-biased media lens, these skirmishes can have the effect of suppressing grassroots opposition rather than catalyzing it. It is only through a Politics of Love that a real enduring alternative power structure can be built, because it is only through love that regular people can overcome the fear instilled deep in them by oppressive systems.

A campaign called #WageLove, inspired by the late, great Charity Hicks, is working to end the water shutoffs in Detroit through a beautiful mix of creative direct action, traditional street protest, and mutual aid. By balancing short-term opposition and long-term institution-building over a decentralized network of organizations, I believe Detroit can win this fight and end the shutoffs altogether while also charting a path forward for water sovereignty in Southeast Michigan and beyond. As Sun Tzu said, “Build your enemy a golden bridge to retreat across.” No one fights harder than he who is cornered to death, and a solution that doesn’t work for our enemies too – once we’ve got them where we want them – isn’t really a solution at all.

In the aftermath of the initial Occupy protests in 2011, a patchwork of emergent organizations were formed that sought to transform the grassroots energy of Occupy into more enduring social change. I have been fortunate to have participated in several of these organizations, including Occupy Sandy, the Paul Robeson Freedom School and now The After Party. Organizations, unlike movements, base themselves not merely in mobilizing people into the streets but organizing them in their neighborhoods for change. In an age of isolation and declining Labor, community organizing is more important than ever. What will tomorrow’s UAWs and AFSCMEs look like, and who will lead them? In an age of New Work / New Economy, where workforce size and profit are dissociated and profit margins eventually trend towards zero as production costs decrease, what does labor organizing look like? These are the questions we must ask of ourselves if we seek to build institutions that will lead to a more equitable and creative future for our kids.

The Packard Plant in Detroit may lay barren of its once 60,000 line workers, but a few miles away a community garden is growing local food, a 3-D printer can replicate entire machines, and a community-owed solar streetlight is going up to replace the one ripped out by the city and its monopoly utility company for non-payment. Change is inevitable, but not easy without forward-thinking institutions that make old systems irrelevant. Only armed with the Politics of Love, with all of its humor and joy and sadness and hope, can we build a world where fear and intimidation have no place.