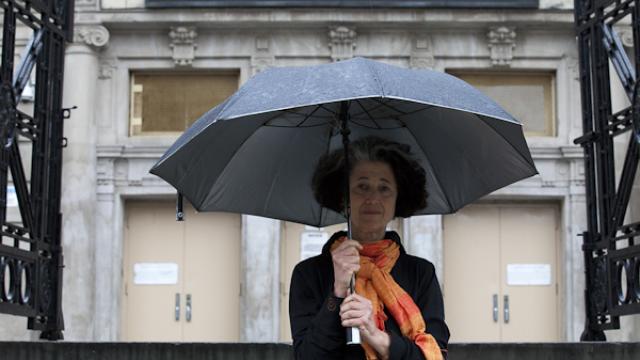 We ask for nothing that is not right, and herein lies the great power of our demand. – Paul Robeson

I stand in the hallway of the school building, my back leaning against a wall and legs crossed. The halls are brightly lit and eerily quiet. Across from me is a typical school fire alarm, with a message hastily taped up next to it: IF YOU PULL THIS ALARM YOU WILL BE ARRESTED.

Another day at Robeson.

Sue and Lizzy are seniors at Robeson, which they affectionately call “Rob-e” (rhymes with Moby). They are outgoing and well-versed, both leaders in their school. Lizzy even served on the Mayor’s Panel for Educational Policy as a non-voting student representative. She sat on this panel when they voted to shut down her school, and gave an impassioned plea to thousands of parents, teachers, and advocates. In short, she’s level-headed but embattled.

“Kids walk out of this school every day,” she said, a pause in her voice betraying sadness. “Just not together like that.”

She’s surprised that the principal suspended each and every student who walked out during the May 1 General Strike. She feels particularly betrayed, perhaps, because all along she had helped liaise with the man. He was, in fact, new to the building and to the fighting spirit of the school. When the city announced it would be targeted for closure, the students held a rally on the front steps, marching band and all. When some of them visited Occupy Wall Street last October, they were so energized they organized a community clean-up around their school with the OWS Sanitation Team.

I came into the building for the first time in the fall of 2010, at the request of community activist and hip-hop pioneer Rodney “Radio Rahim” Deas. Rodney belongs to the Coalition for Public Education, which opposes mayoral control because of what it’s done to schools like Robeson. Rodney had heard of me as “that teacher who used hip hop in the classroom” when I taught digital media to drop-outs in Red Hook. The kids had just been dealt a blow at Robeson and they needed some positive energy, so we came in.

That year, Robeson had 3 principals. None of them seemed particularly interested, however, in the work we were doing after-school with students: media literacy, guitar lessons, math tutoring. Like many teachers in the DOE, Stefanie Siegel – a veteran teacher and a mother-figure at Robeson – shut her door to keep the learning in. The hallways were filled with cops, renamed “School Safety Officers,” and stripped of their guns. They didn’t need guns when their mouths fired off obscenities to the youth, and their metal detectors and wands turned the school into a prison.

“The weekly contact with Justin and Rodney in the midst of a heated political debate around school closures and the first-hand experience in trying to have their voices heard in this arena created a serious political consciousness in our young people,” Siegel remarked.

We didn’t mind that our oasis of learning continued unchecked by the administration – in fact, it made our work easier. The students designed curricula and presentations for workshops and conferences, even scoring 1st place at the 2011 NYU Social Justice Expo. Our colleagues heard about our work through the grapevine and started to ask us about “those fighters at Robeson.”

In the meantime, the Education Department, the state, Pearson and others sent their suits into Robeson to spread the blame around. No one seemed to discuss how overcrowded the school had become when Bloomberg’s “small schools movement” sent kids from farther and farther away flooding into the building. The dwindling number of large high schools in New York were becoming Ellis Islands of refugee students: kicked out, counseled out or dropped out of schools the DOE had turned its back on with “phase-outs.”

We mapped out a plan to save the school that fall. We formed Robeson Unite, an effort to boost morale and organize as a united front against the closure. Students built a website and spread the word through social media. They put out statements and landed meetings with DOE brass. They struggled daily to communicate updates at the breakneck pace of the power shift in their building. Like a home in foreclosure, ownership of a community anchor was being renegotiated – but the students weren’t invited to the negotiating table.

Three months later, when the night of the final decision came, the feeling had already sunk in that things were about to change in a big way. Teachers would lose their jobs and classrooms would switch hands as new, better-funded schools with “start-up grants” entered the building. No new freshmen would be enrolled in the school, but the existing students had little choice but to go down with the sinking ship. Most weren’t offered any opportunity to transfer or given any additional resources to cope with the changes adults far away were imposing like “policy missiles,” as unabashed education advocate Brian Jones put it. The phase-out had begun.

The beginning of the 2011-2012 school year came with little fanfare, and the once-crowded halls of the school began to look more and more deserted. The DOE doesn’t properly track the outcomes of students in schools like Robeson, but it’s safe to say they are dismal. While 13% of Robeson students are homeless, those who do enter the school building each day face constant verbal abuse from school safety officers. The metal detectors thwart their attempts to bring cell phones into the building, so they pay the lady at the corner bodega $1 each day to store them. (Both they and their parents have an interest in the students having their phones on their way to and from school.) Recognizing this highly-profitable venture, entire industries have emerged of entrepreneurs in vans outside schools offering to stash students’ phones for the day. On the day of the walkout, the principal sought to counteract this trend by quietly offering to hold the phones, only to use them as a leash to keep students until the 3 p.m. bell.

When students began to cut class en masse in the afternoon, administrators coupled their truancy with the squeeze on cafeteria space to justify moving lunch to 1:56 p.m. The students, used to being shuffled around by now as the target of policy missiles, barely minded and most left at that time to go buy food instead of eating the bland “free-free” DOE offered them in the cafeteria. 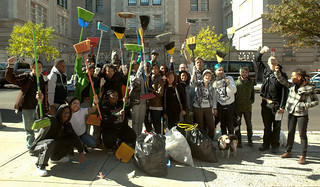 The phase-out had severely dampened the spirits at Robeson, but another project Radio and I were embarking on caused a stir of interest: Occupy Wall Street. When I was arrested in Zuccotti Park while speaking on a megaphone to the General Assembly, I missed class, and students worried what had happened to me. The next week, they came uninvited to Liberty Square to see what was happening. They saw parallels between the police treatment of peaceful protesters and their friends in East New York and Canarsie, who’d been stopped and frisked without cause for wearing a hoodie or looking “suspicious.”

It wasn’t long before the students were brainstorming and planning actions, like the community clean-up. The energy of Occupy had infected the schools: a group of parents and teachers started Occupy the DOE, taking over school board meetings and shutting them down. At one February meeting, it was students who brought the proceedings to a halt, prompting the DOE to send in rows of police officers armed with flex-cuffs. Officers pushed past young children and grandparents to intimidate the youth who had come out to protest the DOE’s treatment of their school. Nobody was happy.

This energy, contained for so long and suppressed by myriad lawyers representing top-down technocratic school administration, could not be contained anymore at Robeson. With the support and endorsement of the Coalition, Chuck D, M1 and many others, the student leaders gathered together and called for a Mass Student Walkout on May 1 in solidarity with the call from Occupy Wall Street. The plan was to converge at Fort Greene Park to discuss their grievances, which ranged from privatization of schools to the failed cell phone policy. Radio and I applauded their conviction and told them they could count on our support and that of the broader Occupy Movement in their courageous action.

When the day came, the students poured out of the building and the community stood ready to greet them.

Would Paul Robeson have walked out with the students that spring morning? I believe it unequivocally. He would have linked arms with a generation of youth who have been sold out, their futures mortgaged to pay for the follies of a few old white men whom they’ll never meet. Robeson would have looked the principal in the eye and asked him why he didn’t walk out alongside his students, but rather chose to suspend them – and incongruously force them to read Martin Luther King’s Letter from a Birmingham Jail during their in-school suspension. 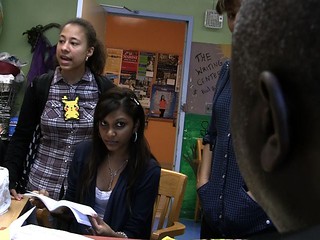 Upon further reflection, it is only fitting that the students returned to their school building to read that sacred document. It was “because injustice is here” that King wrote that letter, and injustice is alive and well at Paul Robeson High School. It has become a literal jail, its windows barred up and its entrances locked to visitors. When Radio and I returned to the building after the walkout, the principal ordered us arrested – an order which the school safety officers would not dare enforce in the presence of students and teachers, so the NYPD blue-shirts were called in with their guns.

This is an environment of incarceration, not education.

This is an environment of imprisonment, not liberation.

And Paul Robeson would be ashamed.

Justin Wedes is an educator and activist and the co-founder of the Paul Robeson Freedom School, a pilot program beginning in Williamsburg, Brooklyn this summer. He has taught at-risk youth in Brooklyn, Detroit, and beyond. He was a founding member of the NYC General Assembly, which brought you Occupy Wall Street, and fights for fair education funding and smaller class size. This summer, him and Rodney Deas are launching the Freedom School in honor of both the famous African-American singer, activist, and scholar as well as the students of Paul Robeson HS, who have endured the impossible for their right to a free and appropriate education.

To support the Freedom School, click here or join us next Wednesday night at For My Sweet, 1103 Fulton St, Brooklyn, for the launch party.